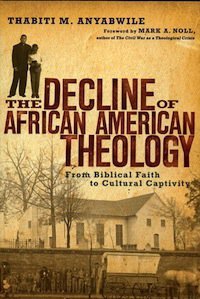 Thabiti Anyabwile’s new book is one where the title really says it all: “The Decline of African American Theology: From Biblical Faith to Cultural Captivity.” This is a book that traces the sad decline of the broad stream of African American theology from its orthodox past to its increasingly unorthodox, irrelevant present. The book makes what is, to my knowledge, a unique contribution to the study of African American theology. “What should be studied as the most central characteristic of the church—its theology—has been for the most part neglected by scholarly research and writing. The thing that makes the church the church—its understanding of God’s nature, work, and interaction with man—has not received sufficient attention as either a subject unto itself of as a motivating factor in more plentiful historical and sociological studies.” This book attempts to fill some of that void, looking to the development of the theology of African American churches and, sadly, looking also to its decline.

The book traces African American theology from its earliest manifestations in slave narratives, slave songs, sermons and popular writings. “Contrary to what might be supposed given the prohibition of education, reading, and writing among slaves, early Black Christians evidenced a rather sophisticated and clear theological corpus of thought. This clarity of early theological insight produced perhaps the most authentic expression of Christianity in American history and formed the basis for the African American church’s engagement in both the propagation of the gospel and social justice activism.” But over time, the theological basis for the church’s activist character was lost and the church became less grounded on theology—less concerned with studying and understanding the character of God—and instead become primarily concerned with social, political, and educational agendas. Because of the many years of theological decline, “the Black church now stands in danger of losing its relevance and power to effectively address both the spiritual needs of its communicants and the social and political aspirations of its community. In effect, cultural concerns captured the church and supplanted the biblical faithfulness that once characterized her. It has lost the law and the gospel, and stands in danger of lapsing into spiritual rigamortis.” This book is call to the African American church to reclaim its effectiveness by returning to a “proper theocentric view of itself and the world.”

To attempt to trace the development of theology over such a long period of time and through so many people, to do so in a volume of only 224 pages, and to do so in a way that was accessible to a broad audience must have been a daunting task. To do this effectively, Anyabwile focuses on key doctrines, key figures, and key time periods. He sets about tracing the decline of African American theology in six chapters, each of which concerns itself with a particular aspect of Christian theology that is critical to an orthodox understanding of God and His work. These are the doctrines that lie at the very heart of the faith.

The chapter headings are as follows:

Each chapter is organized into five historical periods:

Though obviously somewhat artificial distinctions, these historical periods present a logical and helpful framework to understand how African American theology and practice changed over the course of American history. For each of these five eras, “the major theological contributions of key African American thinkers, preachers, and writers are examined for their representativeness of, and impact on, the trajectory of the Black church’s theology.” The author relies on primary sources and generally allows these men and women to speak in their own words.

And as these key figures speak, they show that the thesis of this book is not far off. Where they first speak words that are consistent with Scripture, and where they first show a reverence for God and for His Word, too soon they begin to speak of a God of their own imagining. The decline is clear; it is shocking; it is disheartening. The decline did not come in one step from the humbly orthodox faith of Bishop Daniel Payne to the outright heresy of Bishop T.D. Jakes. Rather, it was a series of steps away from Scripture and away from its authority. As other authorities supplanted Scripture, whether the manifestations of the Azusa Street Revival or the man-centered “theology” of liberalism, the broad stream of African American theology fell into decline. Anyabwile aptly traces this decline both in its manifestation and its consequences. But the book does not end with despair. Though at the end of each chapter Anyabwile has to conclude that African American theology has declined, he offers hope and offers a challenge. He exhorts the African American church to re-center the Bible, to re-exalt God, to recover the gospel, and to revitalize the church.

In his Foreword to this book, historian Mark Noll says “it is remarkable that, to my knowledge, there has never been a book that attempts what Thabiti Anyabwile’s The Decline of African American Theology attempts. For historical purposes, the book makes an unusually valuable contribution with its full account of the course of African American thought. Theologically, it makes another signal contribution with its critique of the general development of that thought. For both historical and theological reasons, this is a very important volume.” It is, indeed, an important volume, and one we should all hope is widely read. It offers proof that the African American church has drifted from the faith it was built upon, but in doing so it offers hope that it can rediscover this foundation and rebuild upon it. Thabiti’s closing prayer is that “the Lord of lords and the King of kings will be pleased to revive us, to turn today’s watered down ‘faith’ back into the enduring faith once for all delivered to the saints, and give us a holy zeal for His glory above all things.” To that prayer, all Christians ought to say a hearty “Amen!”

The book, having been just released, is currently available only at Amazon, but should soon be in stock at other online retailers.