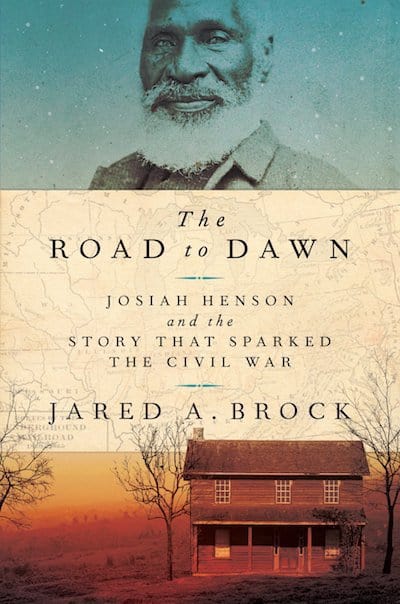 It’s always fascinating to me which characters history doesn’t remember and which ones history cannot forget. Sometimes key players fall out of our consciousness altogether while lesser ones are raised to legendary status. Sometimes real-life characters are lost to the mists of time while fictional ones are treasured forever. This is exactly the case with Josiah Henson. Though he has largely been forgotten, the character who was based on his life lives on. Henson was a significant part of the inspiration behind Harriet Beecher Stowe’s most famous character, Uncle Tom, in her book Uncle Tom’s Cabin. Josiah Henson is also the subject of The Road To Dawn, an excellent new biography by Jared Brock.

Josiah Henson was born in Maryland in or around 1789. From the moment of his first breath he was the property of others, to be bought and sold, to be used and abused. And he was. When he was nine he was valued at $30 and sold, torn from his mother (though, thankfully, reunited with her before long). When he was a young man he was beaten so severely he was permanently maimed. But he endured. As he grew in age and competence he was given increasing trust and responsibility by the man who owned him. Yet this man soon fell upon hard times and transferred his slaves to his brother’s farm in Kentucky. His brother eventually attempted to sell Henson to a plantation in New Orleans and he was saved from this fate only through the timely sickness of his master’s son.

Henson came to understand he must make a break for freedom. With his wife and four children, he made a long, terrifying, and arduous journey to Canada, eventually crossing the Niagara River in 1830. He was free at last. He soon became involved in founding a settlement for freedmen in Dawn Township, Upper Canada. This community became home to the British-American Institute which existed to educate former slaves and their children and to train them in key trades. Henson served as one of the leaders of this institution and its community while also overseeing farms, mills, and other industries. He became a key black leader in Canada and beyond.

And he was just getting started. Converted at age 18 upon his very first hearing of Scripture, he became a Methodist preacher and traveled far and wide to preach to whites and blacks alike. He made many journeys into the American south to help rescue other slaves. He traveled to England for business and ministry purposes where he dined with the Archbishop of Canterbury, had an audience with Queen Victoria, won a medal at the World Fair, and preached in Spurgeon’s pulpit. Along the way he recorded an autobiography which came into the hands of Harriet Beecher Stowe who saw in Henson the seeds of the character she would call Uncle Tom. Stowe would become, according to Abraham Lincoln, the little lady whose book would begin a great and terrible war. And somewhere behind that war, that woman, and her key character, was the incredible life of Josiah Henson.

Drawing predominantly on Henson’s autobiography, but also referencing other key sources, Jared Brock does a skillful job of recounting this life. He aptly captures the horror of the slavery Henson endured and the indomitable spirit and strength of character that sustained him through it. He captures Henson in both his many strengths and his inevitable weaknesses. He also leaves some interesting trails unfollowed, such as the nature of Henson’s Christian faith and the strange contradiction with his commitment to Freemasonry. Henson’s life and circumstances are such that many facts we might wish to know went unrecorded and are now forever lost.

The book closes with an epilogue and an appendix titled “Clarion Call” and here Brock attempts to suggest how we can best honor Henson’s legacy today and how we can continue to make amends for the great transgression that was slavery. In my assessment, much of what he suggests or demands here is ill-thought, impractical, and perhaps even patronizing. Thankfully, though, while these two chapters add little to the strengths of the book, they also do little to detract from them.

The Road To Dawn is a well-written, fast-paced, and popular-level biography that would be of interest to just about any reader. It introduces a man who deserves to be known and remembered, both for the remarkable life he actually lived and for the fictional character he helped inspire.