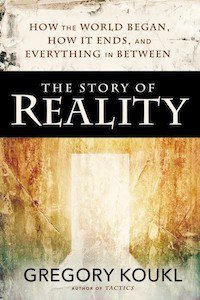 I was wrong. I read the opening words of The Story of Reality and thought, “Here we go again.” Over the past few years we’ve been inundated with books that tell the story of the world, the story of history, through what we might call a biblical-theology lens. You are probably familiar with the standard categories: creation, fall, redemption, consummation, and new creation. Through these headings we can trace and tell the story of what God is accomplishing in this world. It’s helpful, it’s good, and it’s been done a lot recently to the benefit of the church. But this book is not that book. Not quite.

Greg Koukl’s The Story of Reality is, indeed, a telling of the story of the world through a five-part wide-angle lens. The subtitle nicely fills it out: “How the World Began, How it Ends, and Everything Important that Happens in Between.” But what sets his book apart is that instead of serving primarily as a theology text, it serves primarily as an apologetic text. Koukl tells this big story for the benefit of new believers who haven’t yet assembled the various components of the faith into a coherent whole. He tells it also for unbelievers who are approaching the Christian faith as skeptics or seekers.

Koukl means to show that the Bible makes sense of the entire world, that it forms the basis for a cohesive, coherent, satisfying worldview. In her foreword, Nancy Pearcey says it like this: “The Bible is not a fairy tale crafted by ancient people to give a sense of meaning to life. It is an account of reality. [Koukl] calls it a story only because, amazingly, it turns out that reality itself is structured like a great drama: It has a beginning and an end; it features a struggle between good and evil; it reaches a climax and then resolves into denouement and a finale. The cosmos is not just a succession of brute facts. It is the plotline of a grand story that God is telling through the verifiable events of history.”

Koukl structures his telling of the story of reality around five themes: God, Man, Jesus, Cross, and Resurrection. Under the heading of God, he distinguishes between theism and two of the major contemporary challenges: Matter-ism and Mind-ism—that there is no God or that everything is god. He defends theism and the Christian understanding of God as a real, personable, eternal being. Under Man he describes humanity as beautiful, broken, lost, and evil and shows why God must express wrath toward those who defy him.

Then he turns to Jesus, defending him as a historical figure and showing that he came to rescue those beautiful, broken objects of God’s wrath. Cross tells of the great transaction that occurred at the cross which allows us to take advantage of a great exchange through which we give Christ our sin and he gives us his righteousness. Resurrection tells of the resurrection of Jesus and shows how his rising from the dead offers hope that we, too, can and will rise forever. It tells also of the devastating reality of an eternal judgment and calls on the reader to turn to Christ in repentance and faith. “You have one of two choices. You can bend your knee to the Sovereign, beg for mercy because of Christ, be welcomed into his family as a son or daughter, and belong to him. Or you can reject the gift, stand alone at the judgment, and pay for your own crimes against God, such as they are.”

Several years ago I read Koukl’s excellent book Tactics and found that it made a deep impression on me. Much of what he said there continues to resonate and I often find myself imitating his language and concepts. The Story of Reality is a worthy successor. It is a book I would gladly hand to a believer, and perhaps especially a new believer, confident that it will help him see that the Christian faith offers good answers, the best answers, to what this world is all about, why it is the way it is, and where it is all going to end up. I would gladly hand it to an unbeliever, one who is interested in knowing what I believe and why I believe it.

Koukl promises to tell the story of reality. He does, and he does it beautifully. You’ll benefit by reading his telling of how the world began, how it will end, and all the important stuff that happens in between.