It took nearly six months, but the Jefferson County Coroner’s Office finally determined the cause of Nick’s death and sent us an autopsy report. It was a very long wait for a crucial piece of information. And while it was very difficult to receive the report, we were glad to finally know. We couldn’t bring ourselves to read it, so took a quick photo of each page and sent it to a doctor friend. He read the report thoroughly and explained what we needed to know.

In all honesty, I am quite hesitant to share this information. I know that many of you have so kindly supported us through this difficult time and for that reason I’d like for you to know what happened. My hesitation comes down to this: I do not want well-meaning people to send emails with medical advice. For obvious reasons, this situation has been extremely tough and it is one we have had to entrust to medical experts. So I will explain what we’ve found out, but ask that you don’t email or otherwise message me about it. Thanks for your understanding.

Essentially, the autopsy led to a diagnosis of “presumed cardiac dysrhythmia of uncertain etiology.” In other words, for causes that remain unknown, Nick’s heart very suddenly and unexpectedly slipped into an unsustainable rhythm which in turn led to full cardiac arrest. This is a presumed diagnosis, which is the best they can do in such cases. While the cause is unknown, it is possible that it will be determined as we consult with a geneticist in the weeks to come. Genetic testing may (or may not) give us clarity about what caused Nick’s heart to fail.

Two weeks ago was the day that would have been Nick’s wedding. I will write about that more at another time, but it was an extremely difficult day—a day in which I think we were mourning the future that will never be. He was so proud to be engaged, so eager to be Ryn’s husband, so gratified that she was willing to have him. We visited the cemetery that day and laid a boutonnière at his grave as just a token of what might have been. I took the speech I would have given at his wedding—a speech that expresses my pride and honors him for becoming the man he was—and read it there. It was so hard. So sad. So devastating. But the Lord met us there, bringing us comfort through some readers of this site who just happened to be there at the same time, who introduced themselves, and who prayed for us as we stood together by our son’s grave (and within a very short distance of their son’s grave). God is good.

In other news, we remain under that same loose stay-at-home order that has been in effect for a couple of months now. It is set to expire in mid-June and that is when Ontario will begin its incremental re-opening plan. It seems unlikely that we will experience anything close to normalcy until late in the year, at best. It is a little bit difficult to look across the border and see America so rapidly normalizing. It is also encouraging, though, as we presume our time will eventually come as well.

Abby served out her two-week quarantine after returning home from Louisville and is now back to work at a nearby grocery store. Michaela has another month of online school and will then begin summer holidays. We plan to spend a week at a cottage in Quebec for our vacation this year, but that is still up in the air, not least because Quebec and Ontario have closed their border to one another. We are hoping it will be open again by July. And speaking of borders, we are also hopeful that the US-Canada border will open again and remove the mandatory quarantines since we have many friends and family members in the US who are eager to come up here and visit us. Who ever would have thought our countries would mutually agree to close their borders, then keep them that way for over a year?

I had mentioned a while back that my father-in-law was building a stand and display case for Nick’s Bible. He recently completed that project and I could not be more pleased with it. Nick’s Bible now sits in my office, open to 1 Corinthians 15 with its message of hope. And just above it is a portrait of Nick a friend commissioned from Caffy Whitney. It brings me great comfort, when I’m down, to be able to look at that portrait, to look at that Bible, to read the precious words, and to consider the day he and I will be together with Christ. Come, Lord Jesus! 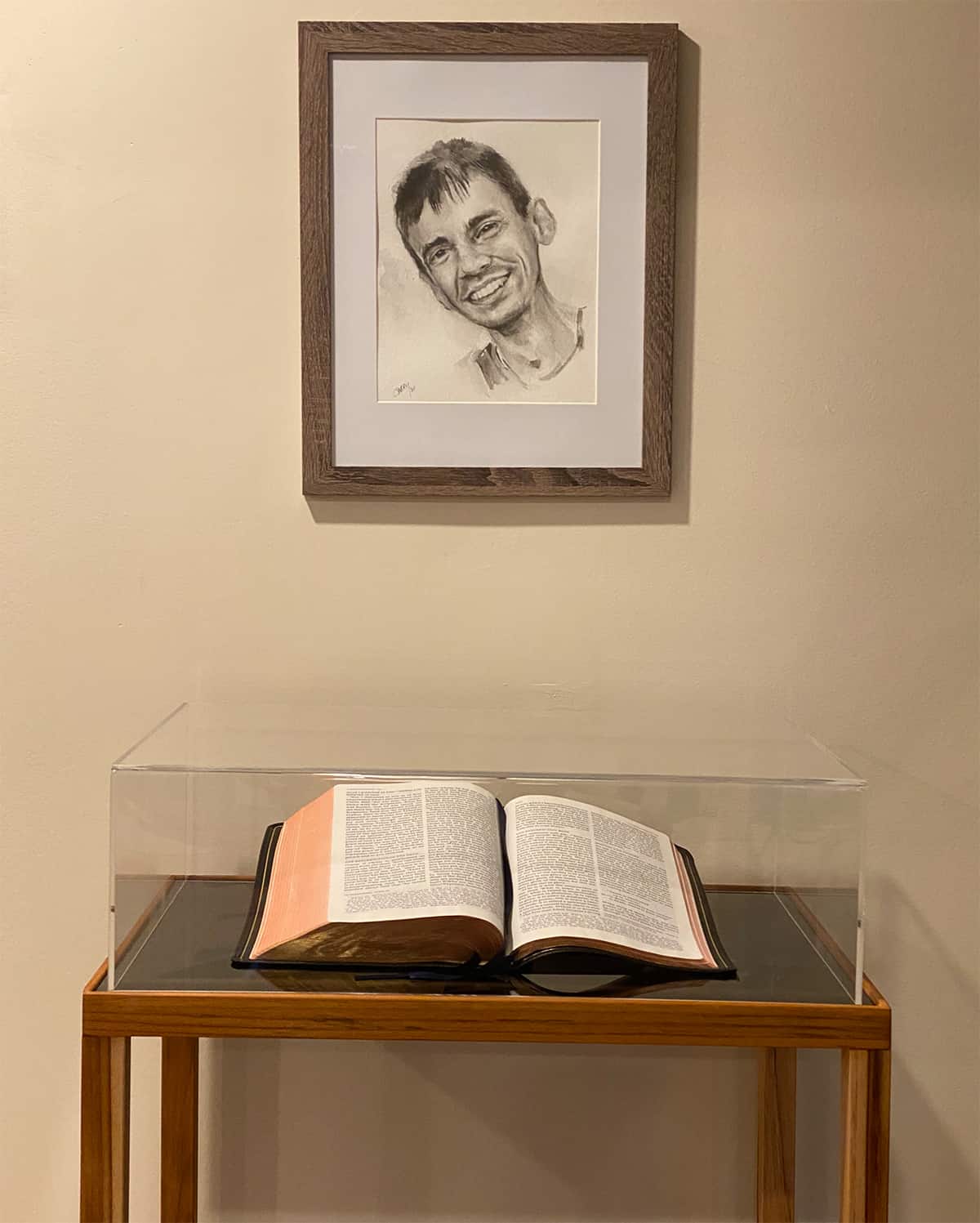