(The way I have ordered them is deliberate. While it is not at all necessary to read them in this order, you will find many common ideas explained in brief in the earlier books, then explained more extensively in the ones that follow. If you can only read one, I’d recommend The Rise and Triumph of the Modern Self; if you read a couple more, perhaps make the the others Confronting Injustice without Compromising Truth and Cynical Theories.) 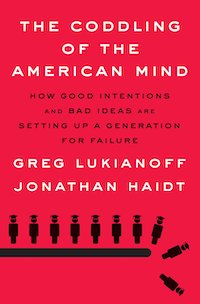 Lukianhoff and Haidt draw attention to what they call the three “Great Untruths” that are impacting society, and especially the younger generations: The Untruth of Fragility (that what doesn’t kill you makes you weaker), the Untruth of Emotional Reasoning (that you should always trust your feelings), and the Untruth of Us Versus Them (that all of life is a battle between good people and evil people). Each of these untruths contradicts ancient wisdom and modern psychological research on well-being while also harming both the individual and the wider community. Yet each one is common in popular discourse—in “safe spaces” on campuses where students will not have to hear ideas they disagree with, in the search for microaggressions, in the dehumanizing of political or ideological opponents. The authors show the importance of antifragility, a resilience in the face of challenges; they show the superiority of fact-based reasoning over its emotion-driven counterpart; they show that the us versus them mentality of identity politics leads to never-ending conflict. They aptly diagnose some serious problems with society and suggest workable cures. I place this book first because to varying degrees several of the ones that follow draw from it. (Buy it at Amazon) 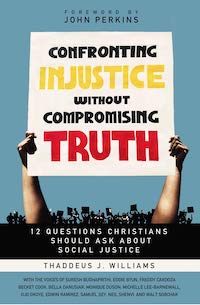 Live Not by Lies by Rod Dreher 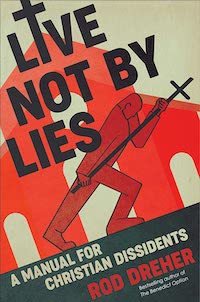 Dreher’s book is both a warning and a call to action. It is a warning that America (in particular, and perhaps the West in general) shows many signs of being in a pre-totalitarian condition. Though the nation is still formally committed to the values of classical liberalism like free speech and honest debate, illiberal left-wing ideologies are quickly leaping from the academy to the mainstream. Such ideologies have already become especially deeply embedded in Big Tech which has the means and the will to deepen the already-existing “surveillance capitalism” that marks our age. Dreher’s concerns were both affirmed and clarified as he interviewed a host of people who once lived under European communist regimes. He sounds their warning that there are many commonalities between Bolshevism and Western “Wokeism.” Most notably, both are built upon lies and depend upon everyone reiterating those lies, whether or not those people truly believe them. Where under Russian communism citizens may have had to spread the lie that their country was peaceful even while they were under constant surveillance, today citizens of America are expected to say “some men have periods.” As for the call to action, he writes specifically to Christians and tells them to dissent from all the lies and to be people who only ever speak the truth. Inspired by Aleksandr Solzhenitsyn and one of his great essays, Dreher calls us to “Live Not By Lies.” I would read this ahead of the two that follow simply because, while it deals with some of the same ideas, it does so in a much more cursory manner. In that way it can serve as a kind of introduction. (Pre-order it at Amazon) 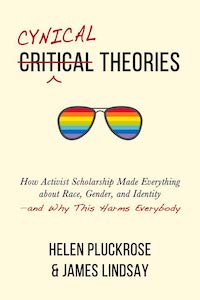 The subtitle of this book aptly describes what Lindsay and Pluckrose mean to accomplish by it: “How Activist Scholarship Made Everything about Race, Gender, and Identity―and Why This Harms Everybody.” It is an introduction and guided tour to what the authors call “Social Justice,” which is essentially a fusion of postmodern and Marxist ideologies that must be carefully distinguished from mere “social justice,” which is a concern for societal justice and equality. This capitalized “Social Justice” is obsessed with relations of power and committed to identifying, deconstructing, and righting all power disparities with the tools of identity politics and Critical Theory. Arising first in the minds of philosophers and the halls of academia, it leapt to the popular consciousness beginning in the early 2010s. Today it is being disseminated further through corporate diversity training, bestselling books like White Fragility (my review), and organizations like Black Lives Matter. In fact, its worldview is increasingly taken to be established fact. The authors, both classical liberals, believe it will eventually self-destruct, but warn that in the meantime it will cause great damage to individuals, society, and human advancement. They call their readers to identify it and do fair battle against its ideas and advocacy. It is a superb introduction to Social Justice. (See my thorough review or buy it at Amazon)

The Rise and Triumph of the Modern Self by Carl Trueman 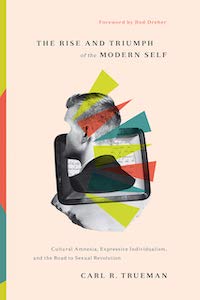 “I am a woman trapped in a man’s body.” The Rise and Triumph of the Modern Self is essentially a 400-page explanation of that single sentence. Anyone who might have heard those words even two or three generations ago would have regarded them as nonsense. Today, though, they are not only meaningful, but so meaningful that to fail to affirm them is to be considered bigoted or phobic. What happened in society to bring about so great a change? Many would immediately point to the sexual revolution, but Trueman shows that the sexual revolution is itself a mere symptom of a much greater revolution of the “self.” And it is this revolution that he traces beginning with Jean-Jacques Rousseau, then advancing through the poets of Romanticism, and then the world-shaping ideas of Nietzsche, Marx, and Darwin. It was through these figures that the self became psychologized. The next key figure is Sigmund Freud through whom psychology became sexualized, so that psychological health became inseparable from sexual self-definition and sexual fulfillment. The final step was for sex to become politicized, and that came about through the New Left as it was inspired by the teachings of Wilhelm Reich and Herbert Marcuse. Today we are witnessing the triumph of the erotic and the therapeutic, which leads inexorably to the associated rise of transgenderism. I don’t think there will be a better-researched or more fascinating book in all of 2020. (Pre-order it at Amazon) 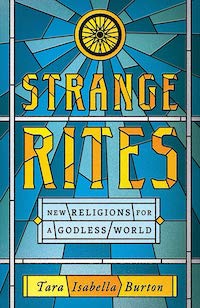 We all know by now that the past couple of decades have seen the precipitous rise of the “Nones”—those with no formal religious affiliation. What Tara Isabella Burton shows in Strange Rites is that this lack of formal religious affiliation should not be confused with a lack of spirituality. To the contrary, the “Nones “are actually the “Remixed,” people who satisfy their need for meaning, purpose, community, and ritual with new and personalized intuitional faiths rather than their traditional institutional counterparts. The internet has allowed people to form into tribes based on every possible interest; meanwhile, consumer culture has made spirituality a kind of lifestyle brand that can be publicly performed. Through it all, we are seeing a new kind of Great Awakening where people are leaving established religions to form their own bespoke alternatives. That being the case, there are now several new civil religions vying for dominance in Western culture—social justice (advocating for equity against an intrinsically white supremacist and patriarchal culture), Transhumanism (overcoming the limitations of the body through technology), and atavism (which ranges from relatively benign Jordan Peterson-style Stoicism to malignant alt-right neo-Nazism). Interestingly, what they have in common is a vision for the world and for humanity that is immanent rather than transcendent, so they offer nothing beyond this life or beyond this world. (Buy it at Amazon) 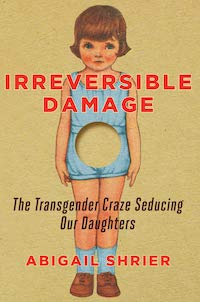 While society has always had a category for people who have a discomfort with their biological sex, a condition known as gender dysphoria, modern society is surely unique in separating sex and gender to such a degree that a man can be a man, a woman, something in between, or something of his own definition. And though we may associate transgenderism with a celebrity like Bruce/Caitlyn Jenner, the past few years have witnessed an alarming rise of transgenderism among young women. Abigail Shrier decided to explore this trend and did so primarily by interviewing the families of adolescent girls who had declared themselves to be boys. She came to believe that transgenderism has become a trend or craze among girls, and especially girls who are in some way uncomfortable with their bodies. Society offers no choice but to celebrate the girls’ discomfort, to affirm their questioning, and to help them transition, even if this results in psychological distress or physical mutilation. While Shrier’s book is not an “idea book” as much as the others on the list, it still offers a helpful examination and explanation of an alarming development. (Read my review or buy it at Amazon; also consider reading Affirming God’s Image by J. Alan Branch.)

(Edit: For whatever reason, I didn’t think of Albert Mohler’s The Gathering Storm as I was putting together this article, but should have. You can read my review of it right here.)