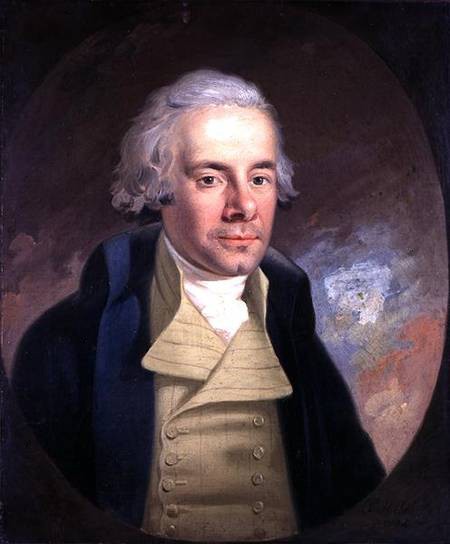 William Wilberforce (1759–1833) was the English politician and Christian philanthropist who led the abolition of the British slave trade. Wilberforce was Born in Yorkshire, England, but his father died when William was just 8 years old, so he went to live with his aunt and uncle, Hannah and William. (It may be of interest to the readers of this blog that Wilberforce’s aunt Hannah was the sister of Christian philanthropist John Thornton). Because of the wealth of his parents, he was able to live comfortably even with minimal work.

When he was 21, Wilberforce won the seat in the House of Commons in his hometown, Hull, because of the money he was able to invest and because of his great oratorical skills. This vocational move began 50 years in English politics for Wilberforce. In 1784, he was elected to a much more influential seat in Yorkshire. It wasn’t until he turned 37 that he met and—2 weeks later!—married his wife, Barbara Ann Spooner. In the first eight years of their marriage, they had four sons and two daughters. Wilberforce was devoted to the cause of abolishing the African Slave Trade for the rest of his life.

The aunt and uncle Wilberforce lived with were evangelical Christians. But concerned that her son was “turning Methodist,” his mother sent him to a boarding school. When there he lost interest in Christianity and cared more about being accepted by the social elite. But when he was 25, Wilberforce connected with Isaac Milner, a friend he met in grammar school who had since trusted in Christ. After talking with Milner at length about his hostilities and objections against Christianity, Wilberforce professed faith in Christ.

His conversion was not merely a private matter. Rather, his new faith led him to change his own lifestyle and to care for those in need. One of Wilberforce’s biographers, John Pollock, wrote, “He lacked time for half the good works in his mind.” But he believed that such good works could come from a new heart that only God can give. Thus, he was both doctrinal and pragmatic. He loved the truths of justification by faith alone, the regenerating work of the Holy Spirit, and the substitutionary work of Jesus. But he also loved pursuing justice for the poor, needy, and enslaved.

While Wilberforce is obviously most remembered for his arduous work against the British slave trade, he also made numerous other vocational and financial contributions to the work of Christ’s kingdom. He volunteered for dozens of societies. For example, he worked for the Church Missionary Society, the British and Foreign Bible Society, the Sunday School Society, the Society for Bettering the Condition of the Poor, and he even helped send missionaries to India and Africa. In fact, Wilberforce made major contributions to at least seventy such societies. He also used his wealth to help relieve the suffering of the manufacturing poor, French refugees and other foreigners in distress. Beside all that, he was also active in numerous reform movements including hospital care, fever institutions, asylums, infirmaries, refugees, and penitentiaries.

Finally, Wilberforce wrote a book called, A Practical View of Christianity, which had five printings in six months and was translated into five foreign languages. In it, he articulated the doctrines particular to Christianity which give rise to godly affections (or emotions). He also supported other religious publications and education, especially the schools of Hannah More, a close friend and leading reformer of British education. After ending the slave trade, Wilberforce spent the next 25 years seeking to end the institution of slavery itself. Providentially, three days before he died, Wilberforce heard that the House of Commons had passed a law emancipating all slaves in the British Empire.