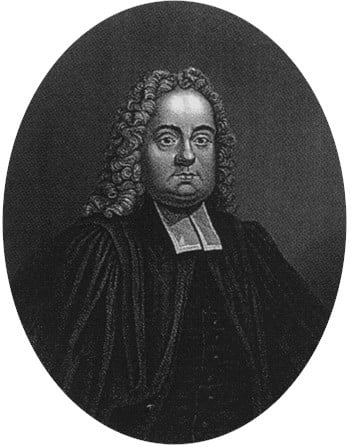 Matthew Henry was born in 1662, the same year that the Act of Uniformity barred his father, Phillip, and 2000 other pastors (including Thomas Brooks) from official ministry in the Church of England.

Henry was raised by godly parents in the Puritan way (daily Bible reading, prayer, self-examination, etc.) and always wanted to be a pastor. However, believing there was little chance of ever becoming one, he decided to study law and pursue theological study only on the side. Before long he began preaching on the side as well. This led to him being asked to serve as a local minister, at which point he became ordained as a Presbyterian minister and took up the pastorate in Chester.

That same year, 1687, he married Katherine Hardware. Sadly, she passed away just two years later during childbirth. A year after Katherin’s death he married Mary Warburton. Between them they bore a son, Philip, and eight daughters, three of whom would die in infancy.

Henry was a popular preacher who, by principle, never refused an invitation if he could possible accept it. In addition to his own church, which grew steadily, he took on monthly engagements in five other villages, along with regular visits to preach to prisoners.

After serving for 25 years in Chester, in 1712 Henry accepted an invitation to pastor a church in Hackney, an important congregation near London. Just two years after that transition, in May of 1714, while returning home from a visit to Cheshire, he fell from his horse and passed away the following day. He was 52 years old.

Matthew Henry is most remembered today for his Commentary on the Whole Bible. He began work on it in 1704, laboring diligently until his death. In those ten years he completed and published volumes covering Genesis through Acts. After his death, a group of 13 fellow ministers compiled notes from his preaching to complete the Commentary from Romans through Revelation.

The Commentary was and remains so well known because of its ability to apply the Scriptures to life. It “has never been surpassed in its practical emphasis. Its divisions, main points, and practical applications are invaluable,” write Beeke and Pederson (Meet the Puritans). And J. I. Packer concludes,

Simple and practical in style while thoroughly scholarly and well-informed for substance, the Commentary remains an all-time classic, standing head and shoulders above any other popular exposition produced either before or since. (Puritan Portraits)

Indeed. We may at times shun older commentaries in favor of more modern ones, but we lose too much if we forget about Henry’s. He is a master of the pithy phrase and at distilling whole sections of Scripture to one or two pertinent, heart-searching points of application.

If you are going to read just one of his works, make sure you reference his commentary. There is nothing quite like it.